How then can I do this great wickedness and sin against God?

JD Greer once wrote, "trying to tame sin rather than killing it is as silly as people making pets out of predatory animals."

I recently read an article with the headline, "Pennsylvania Woman Killed by Pet Bear."

This woman had raised a black bear named Teddy from cubhood, and for nine years, there were no incidents. But then, one day, as she was cleaning his cage, the bear mauled and killed her.

Some of the neighbors acted surprised. One said, "She was a good person; we just thought she had a strange hobby."

Perhaps she was a good woman, but it doesn't matter whether you're good or you've named your pet bear Teddy… she wasn't collecting coins, and sooner or later, bears do what bears do.

As a Christian, you have to acknowledge the predatory nature of sin, which means you also have to be continually fighting back. It is like the puritan John Owen said, "you had best be killing sin or sin will be killing you."

How do you kill sin? I have found John Piper's ANTHEM very helpful:

Avoid as much as is possible and reasonable the sights and situations that arouse unfitting desire.

Know our weaknesses and what triggers them. "Avoiding" is a biblical strategy. "Flee youthful passions and pursue righteousness" (2 Timothy 2:22). "Make no provision for the flesh, to gratify its desires" (Romans 13:14).

Say "No" to every lustful thought within five seconds.

Turn the mind forcefully toward Christ as a superior satisfaction.

Hold the promise and the pleasure of Christ firmly in your mind until it pushes the other images out.

Fix your eyes on Jesus (Hebrews 12:2). Here is where many fail. They give in too soon. They say, "I tried to push it out, and it didn't work." How long did you try? How hard did you exert your mind? The mind is a muscle—flex it.

One reason sin reigns in so many is that Christ has so little appeal. If you want to fight sin, awake your affection for Jesus.

Move into a useful activity away from idleness and other vulnerable behaviors.

Lust grows fast in the garden of leisure. Find a good work to do, and do it with all your might. Displace deceitful desires with a passion for good deeds.

It is beautiful. I love the encouragement on every page. It is the perfect size. 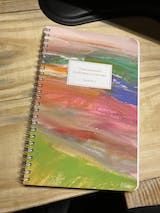 Theresa Mangum is my late sister...we found out the designs she submitted to Paper Sunday released the day before she passed. The Sharon's Monarchs design is even more special to me...since it was the last thing Theresa painted for me.
I use my journal daily as a diary to Theresa and my planner is with me at all times.
Thank you for honoring my sister with her collection.

My husband and I are traveling to the Holy Land this fall. I ordered these for us to journal about our trip. My husband loved his book and couldn’t believe that his name was on every page. 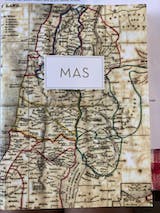 This journal is in remembrance of my youngest daughter, Theresa (the artist who's design graces the cover) and it gives me such joy and peace to see it and write in it everyday. The personalized scriptures are a true blessing and keep me focused as I journal my new path in life. 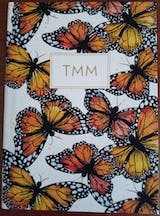 Hi, my niece is the late Theresa Mangum, who designed several journal & planner covers for Paper Sunday. She was a fabulous artist. Abstract is not my favorite, but it was Theresa’s. Pink isn’t my favorite color, but I absolutely love the pink abstract on the cover of my personalized journal. Paper Sunday was quick to get the journal printed & shipped. Excellent customer service, excellent company! Thank you for your prayers for my family as we grieve our great loss💞 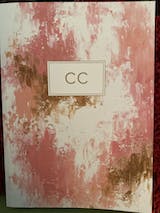 I purchased one of my late niece’s (Theresa Mangum) personalized journal for myself. I love it…I’ve always loved all of T’s art & inspiration. She is missed very much. ~cc~ 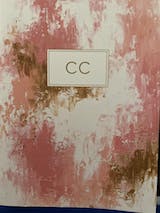